Companion of the Root

Rippling Brook, Kirkland
Colin is a human boy appearing to be about 7... but he's actually over one hundred years old.

He was kidnapped by faeries and because time passes differently in other dimensions, one hundred years had gone by. He looks at the Companions as his new family.

He's an odd child, but whether that is because of his time with the faeries or his inherent personality is yet to be seen.

He is voiced by Lena Winter. 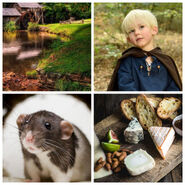 by PodcastCat on Tumblr
Add a photo to this gallery
Retrieved from "https://sirrodneytheroot.fandom.com/wiki/Colin?oldid=446"
Community content is available under CC-BY-SA unless otherwise noted.