King Alfred is the ruler of the Kingdom of Kirkland.

He is described in the script for Episode 1 with:

King Alfred is human, in his 50s. A gregarious man, if a bit of a tyrant. A likable one, nonetheless. In his defense, he's only known a life of luxury and having his every word obeyed... that is except for when it comes to his daughter, Camilla.

King Alfred never married, and so it was decided that he should chose one of his extended relations to be his heir. He adopted Camilla when she was two years old; even at such a young age she was the cleverest of all of his family. 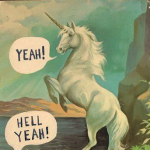